The PRINCE GEORGE HOTEL was constructed in 1809 and became a hotel during the middle of the 19th century. It now houses a hotel and a lively Irish pub known as Tir nan Og.

The hotel is situated on Ontario Street, Kingston’s waterfront, which was a most convenient set up for the local bootleggers who ran liquor up and down the lake during prohibition. The hotel, constructed of limestone, as most buildings in Kingston are, was built over 195 years ago in 1809 and has been used as a hotel for the past 150 years.

There exists a story of one Lily Herchmer, who lived with her parents on the site that the present hotel now stands. A frequent visitor to the Kingston port was a sailor with whom Lily fell in love. It is said she would often hang a lantern in her window to let her lover know she was there waiting for his arrival, however on one windy night, the lantern fell from the window onto the floor quickly engulfing the room in flames. Lily having fallen asleep perished in the fire. Is Lily still haunting the landmark?

We arrived at the Prince George Hotel at 3:00pm, unloaded and parked the vehicles. Entering the small, but elegant lobby, we received our room keys and proceeded up to the room known for being one of the most haunted in the hotel.

We immediately set up the cameras and audio recorders and left the room to attend the downstairs pub for dinner. After a leisurely dinner we re-entered the room, changed tapes, relaxed and left for the local Ghost walk. The Ghost Walk itself was quite interesting and riddled with the various stories of the area. The guide was well informed and gave an excellent tour, which was most enjoyable.

After the tour, we did our own walk-about through town, all the while leaving the cameras and audio equipment running in the room.

We returned to our room very late and proceeded to get ready to get some sleep, settling in at approximately 3:00 am. At 3:30 am I was awakened by a noise at one of the windows. Thinking that maybe I was just hearing things in mid-sleep, I lay there and just listened. As I lay there, I heard the same noise at the window yet again. It was definitely the east window (there were two windows in the room). This time I woke up Anita and told her to listen. Although not meaning to, we woke Steve as well. We all listened intently however, we didn’t hear the noise at the window again. It had sounded to me like a smacking sound with a flat hand, and I thought “it figures, I’m the only one that heard it”.

Once again, we settled down for what was left of the night. That’s when the bed started shaking, however slightly. Anita was lying quietly next to me in the bed facing the other way, so I knew it wasn’t her shaking the bed. I mentioned it the next morning and Anita confirmed that she felt the bed shake as well, but thought it was me kicking my feet and trying to get comfortable. I explained to her that I was just lying there quietly while it was happening.

Upon waking at approximately 9:00 a.m., it suddenly struck me that we had left the video cameras running all night while we had slept, so the window noise had to be on the tape. I immediately went to the videotape and started playing back that particular section, which would correspond with the time between 3:00 a.m. and 4:00 a.m. Sure enough we had it on videotape. It definitely sounded like smacking with a flat hand against the window. So we started trying to reproduce the sound.

Krystal taped on the window with her finger in case there were birds on the ledge during the night tapping with their beaks; not the same noise. She then rapped on the window; still not the same noise. She then proceeded to smack the window with the flat of her palm; that was the sound. We repeated the same process on the west window however, even the smack with the flat palm produced a different sound, so it was definitely the east window.

Once home, we replayed the audio recording that we had rolling while all of us were out of the room the night before. It sounded as if someone was in the room rooting around and going through our things. We had told the front desk not to enter the room as we had equipment running at the time. Our immediate thought was someone had actually entered the room while we were gone.

So now we had what sounded like someone in the room moving around, however there was no physical body there at the time. We had smacking on the window in the early hours of the morning, however we were three floors up with no balcony or for that matter, any place to stand outside of that window. We further had a shaking bed that we were actually in at the time and for which we could find no explanation.

Oddly enough, we were told a story about a couple who had previously stayed in the same room and during the night woke to find the second bed in the room floating above the floor. Was it the same bed that Anita and I had been sleeping in?

We have learned that the Prince George Hotel, unfortunately, suffered a fire in the early hours of  January 1 2004, which destroyed both the second and third floors of the building. The company that owns the hotel has acknowledged that they will rebuilt and reopen the hotel later in the year.
UPDATE, July 2004
The Prince George Hotel has reopened and is taking reservations.
info@hauntingsresearch.org
2003 © Hauntings Research Group

The third window from the left is the window the knocking came from at 3:30 a.m.
Above:  Front Desk
Below: Prince George Hotel Lobby
Prince George Hotel, Kingston, Ontario
HAUNTINGS RESEARCH
The
Group
Stonewood 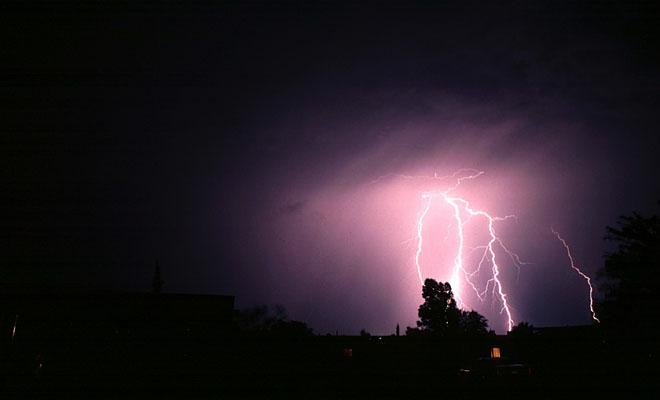